ISAL systems allow various mobile or stationary uses in the illumination of:

Product Group is the latest generation of intelligent systems for autarkic lighting.

ISAL are high-tech systems of best quality, in which only top-notch components are installed:

-systems absorb the freely available daylight and release the stored energy through lighting in the dark.

ISAL systems absorb the freely available solar energy through their solar module in the daytime. Solar energy is converted into direct current by a photovoltaic module and thus charges the battery during the day. At night or at dawn, the LED lamp switches on automatically by using the energy stored in the accumulator. In the morning or with enough daylight, the LED lamp switches off again.

-systems are powered by solar energy and thus are grid-independent. Therefore, they provide a reliable alternative to conventional illumination by delivering light from twilight till dawn. 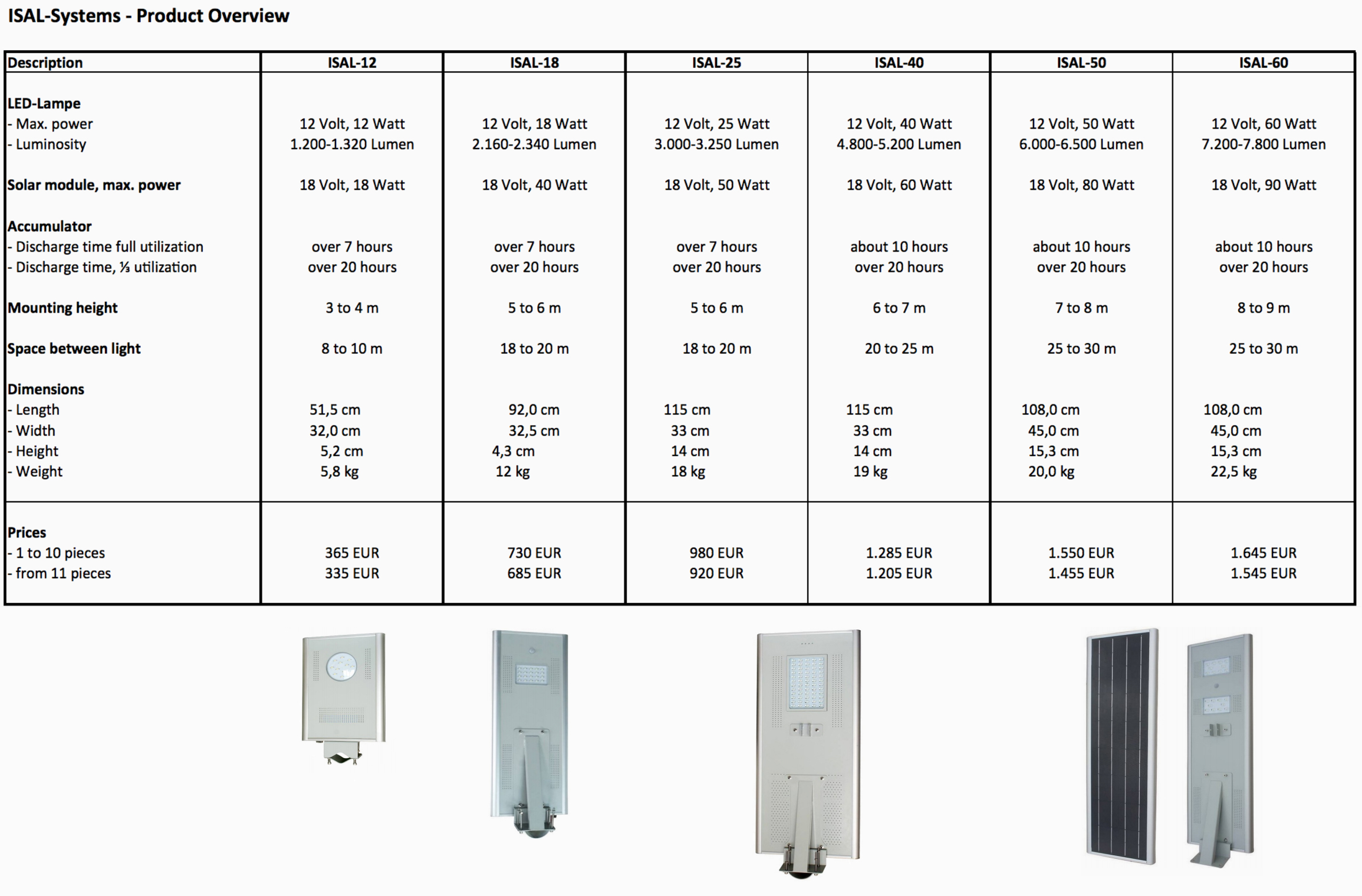 LED stands for light-emitting diode, or light diode for short. LED is a light-emitting semiconductor component with electric properties corresponding to those of a diode. When electric current flows through the diode in the forward direction, it emits light with a wave length depending on the semiconductor material and the doping.

Manufacture-related deviations may occur in the colour temperature and brightness values in the production of light-emitting diodes. Therefore, the data sheets of each offered class („bin“) show various illumination intensity.

LED has already taken about 50% of the lighting market. This is mainly due to its high energy efficiency, its natural and cool light, its lifespan, its gradual and not just sudden outage as well as its robustness.

LEDs installed in ISAL systems illuminate a relatively large area due to their lighting viewing angle of 120°. At the same time, they are characterized by a high light output of 120-130 lm / W (lumens per watt). Thus they are many times more efficient than conventional incandescent lamps (about 10-14 lm/W) or halogen lamps (15 – 20 lm/W), and even much more efficient than fluorescent lights (70 – 90 lm/W).

Unlike with incandescent lamps, LEDs show increased efficiency when operated at lower than the nominal power, for instance with intelligent intermittent switching. At the same time, the lifespan is longer due to the reduced temperature.

Considering all material and energy flows, from manufacturing to the end of useful life, light generation accounts for over 98% of total energy consumption. LED lamps are therefore very efficient both in their use and production. By way of example, according to the Stiftung Warentest (2013), the life cycle assessment of LED lamps is better than that of compact fluorescent lamps or even halogen bulbs.

Unlike fluorescent lamps, LEDs are free of mercury and thus pose no health risk to people even in case of damage. However, the electronic components and rare earths contained in LEDs must be disposed of as electronic scrap.

A photovoltaic system is a solar power system, in which a portion of solar radiation is converted into electric energy by means of solar cells. Such typical direct type of energy conversion is called photovoltaic.

The solar module consists of series-connected solar cells, which are hermetically sealed. Monocrystalline solar cells are manufactured separately and are subsequently connected by metal foils, while silicon serves as a semiconductor.

At option, the off-grid solar power modules of ISAL systems are separated permanently or temporarily from the power grid. Power supply is not required.

During the day, the unused power is stored provisionally to be further used according to the needs. ISAL systems are operated with 12 volts DC.

High-quality Li-Ion batteries maintain the lead against the cheaper lead-acid batteries, as their operating costs are significantly lower due to their longevity. Thus we assume that the battery needs to be replaced every 5 years at most.

Accumulators installed in ISAL systems to store solar energy are protected against deep discharge or overcharge through a charge controller.

Send us a message

SC Garant GmbH & Co. KG undertakes the general agency in Germany and other countries regarding products with unique selling points.

The company name stands for the products offered:

The letters „SC“ stand for Selective Cooperation, as cooperation is entered into only with selected manufacturers whose products have high customer benefit and are right on the cutting edge.

Please select an option. You can find more information about the consequences of your choice at Help. Datenschutzerklärung | Impressum

Select an option to continue

Your selection was saved!

To continue, you must make a cookie selection. Below is an explanation of the different options and their meaning.

You can change your cookie setting here anytime: Datenschutzerklärung. Impressum